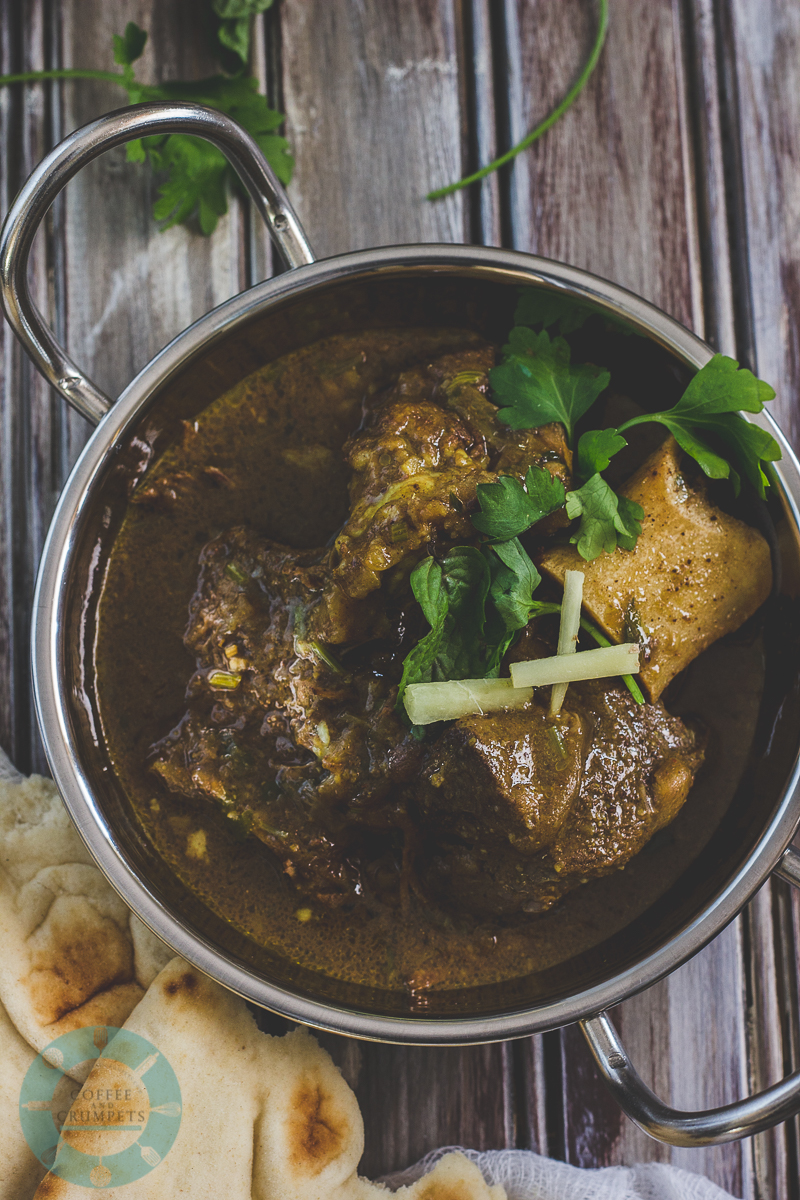 Happy New Year, lovely friends! I hope 2016 is off to a fantastic start for all of you; brimming with projects, resolutions, plans and prosperity. Our New Year’s Eve was quiet as usual. I think I was asleep by 11.44 pm, and I know the time because my brother texted me from Texas, soon after their New Year arrived, and I was able to text back with sleep laden, bleary eyes.

I can’t remember any exciting New Years Eve in a long time. It’s not like I did all that much when I was young and carefree, but I really can’t remember celebrating in any late night, festivities manner. Boy, am I getting old. 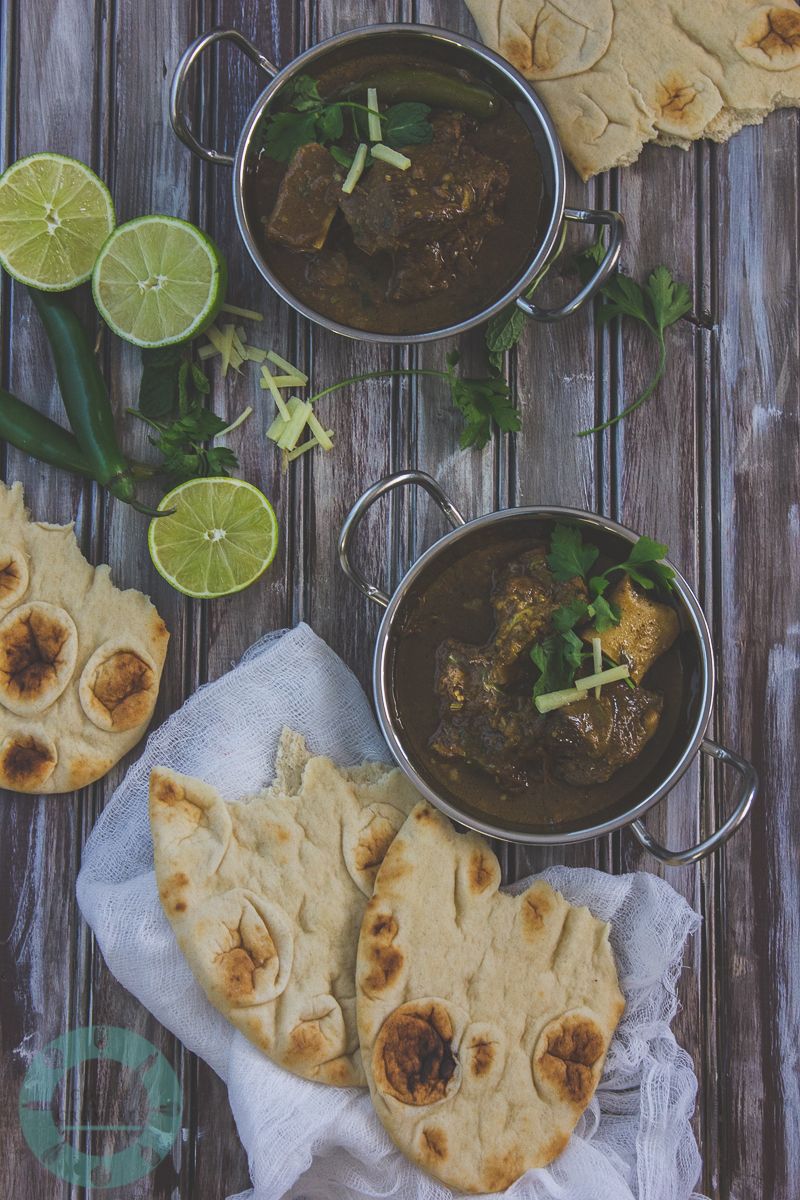 I did have plans to host a New Year’s Day lunch but a couple of days before hand, I got some sad news of my uncle passing away. He was quite dear to me and it just seemed wrong to throw a party when my heart was not in it. I cancelled the event and my friends were all very gracious and wonderful about it. I plan to reschedule as soon as I can.

Monday morning was a lesson in reality; the reality of back to work and school and the knowledge that there are no more holidays for a while. I don’t work a regular schedule but man, was I depressed. I’ve always enjoyed the holidays. The weather, the parties, the shopping but especially the time off. 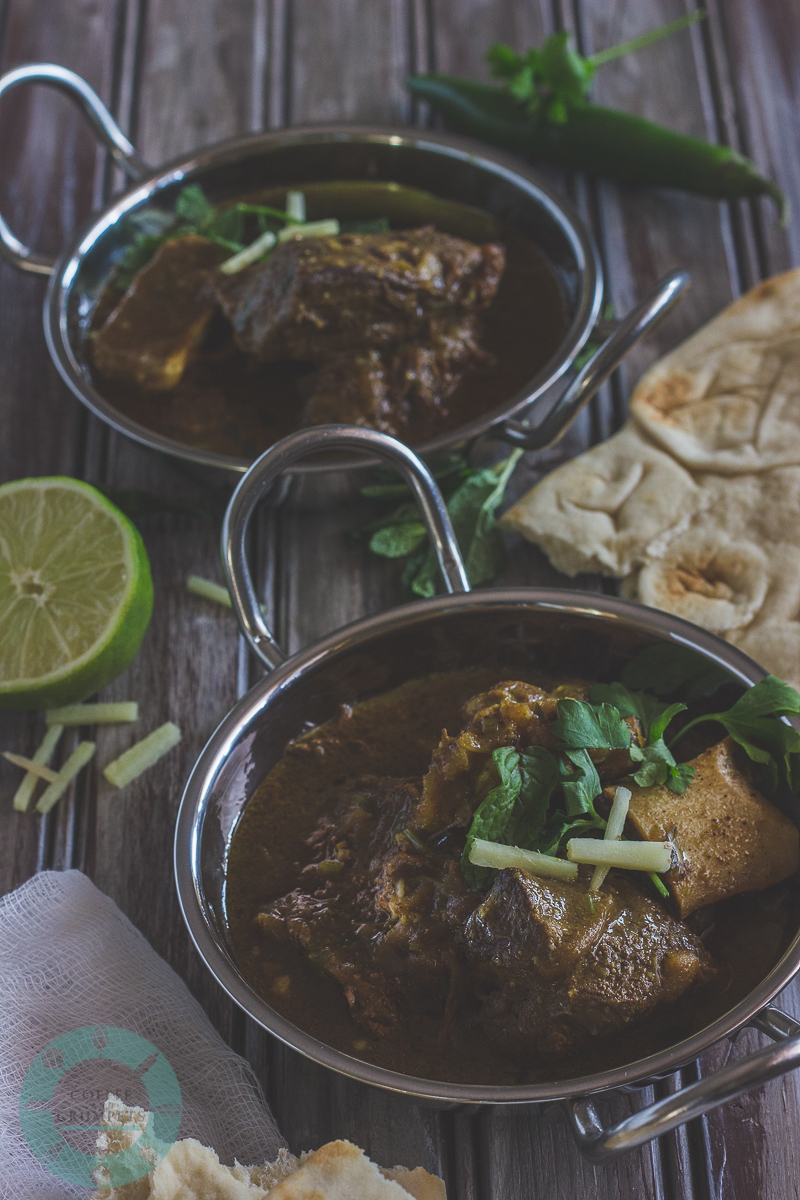 Being at home without a schedule or deadline and having my husband home for 3 days every week was amazing. We did nothing and enjoyed every second of it. We did take a trip up to Idaho Springs, to hike around the lake at the base of Mount Evans, over the weekend. It was just the two of us and it was so exhilarating and just gorgeous to be surrounded by all the beauty. We walked across the frozen lake and marvelled at the layer of thick ice holding us up, and hiked through scented pine trees and firs. 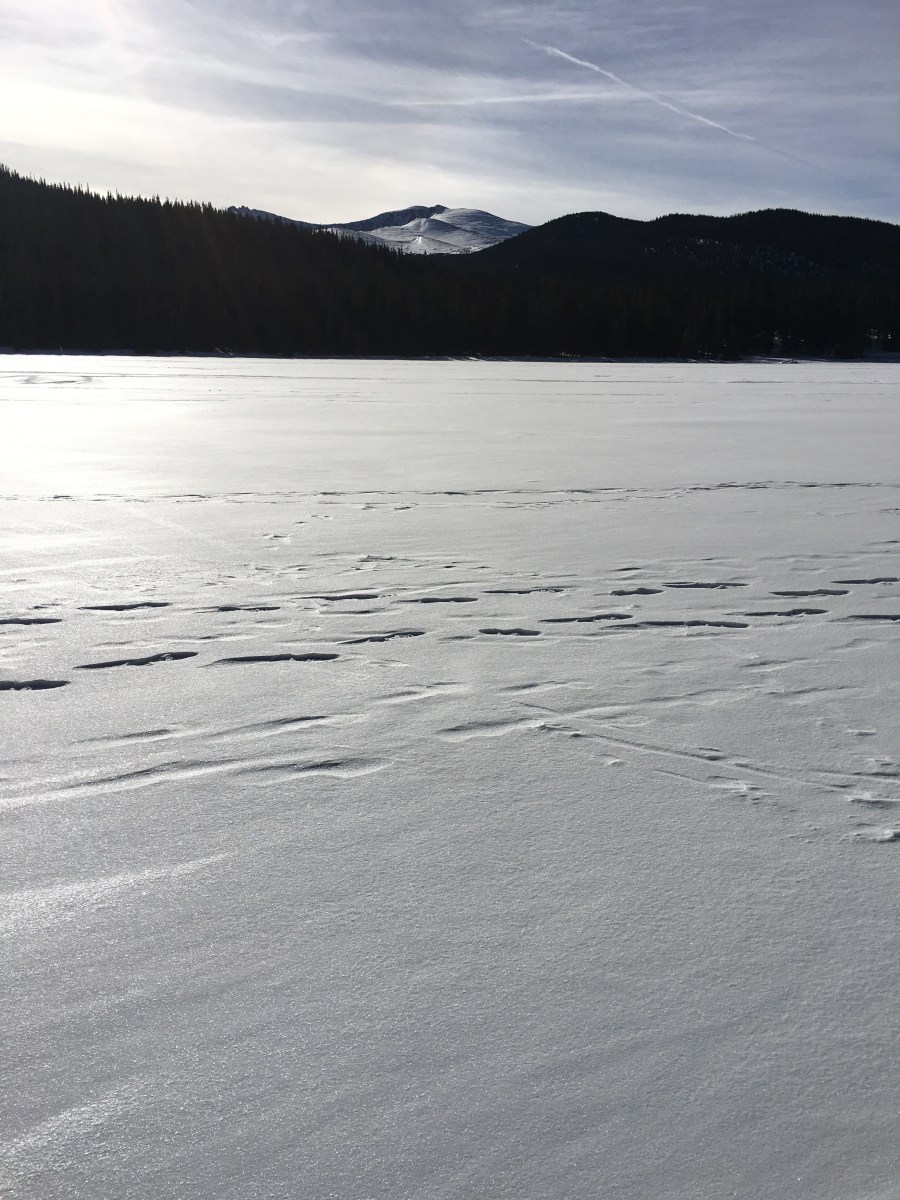 The sky was the bluest blue with barely a wisp of a cloud; the air was brisk and refreshing; and the snow glinted like sparkly glitter freshly spilled from the heavens. I couldn’t resist the sparkles and scooped up a handful. It was cold, dry and glittery; the crystals shone in my hands like diamonds. I blew lightly and they fluttered away, gleaming in the sunlight as they danced away. 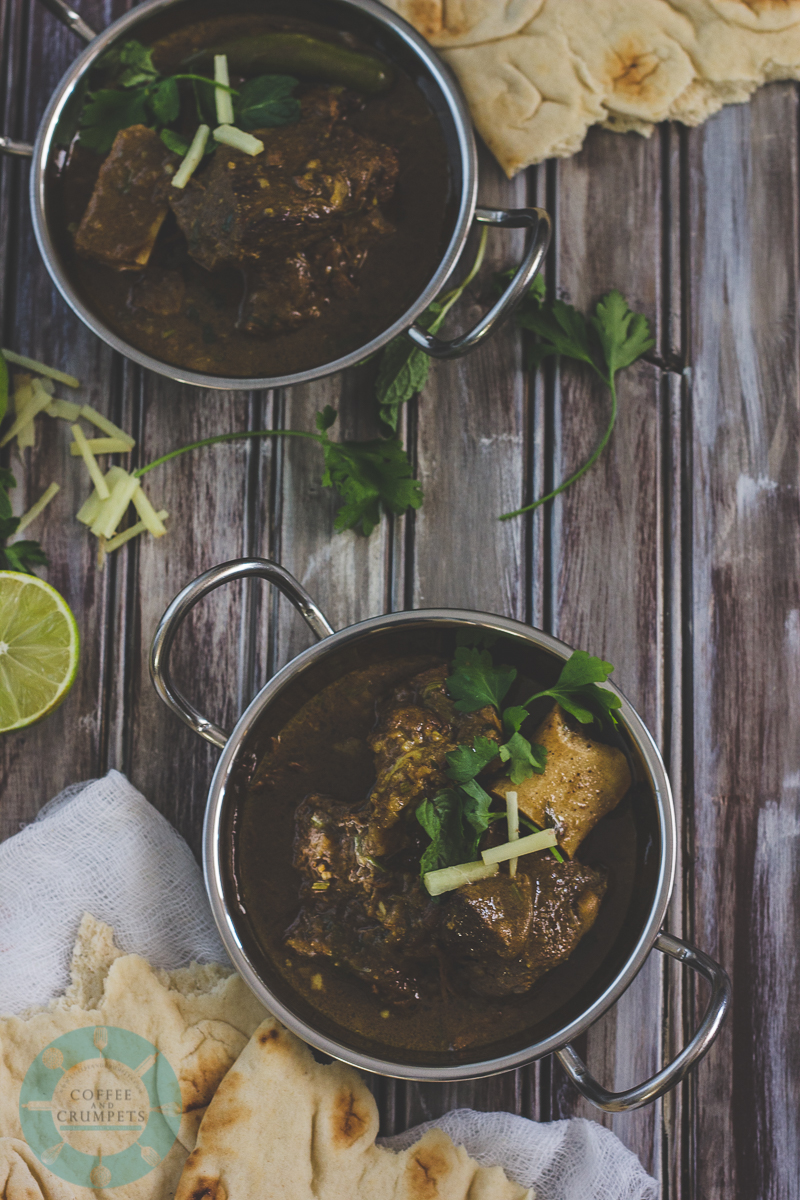 The sound of our footsteps on the snow was deafening. You’d think that soft snow wouldn’t make so much noise, but slightly packed snow and hiking boots make for some loud, squeaking sounds! We didn’t realise the noise until we stepped onto the pavement to walk back to the car and our ears were revolting from the silence. 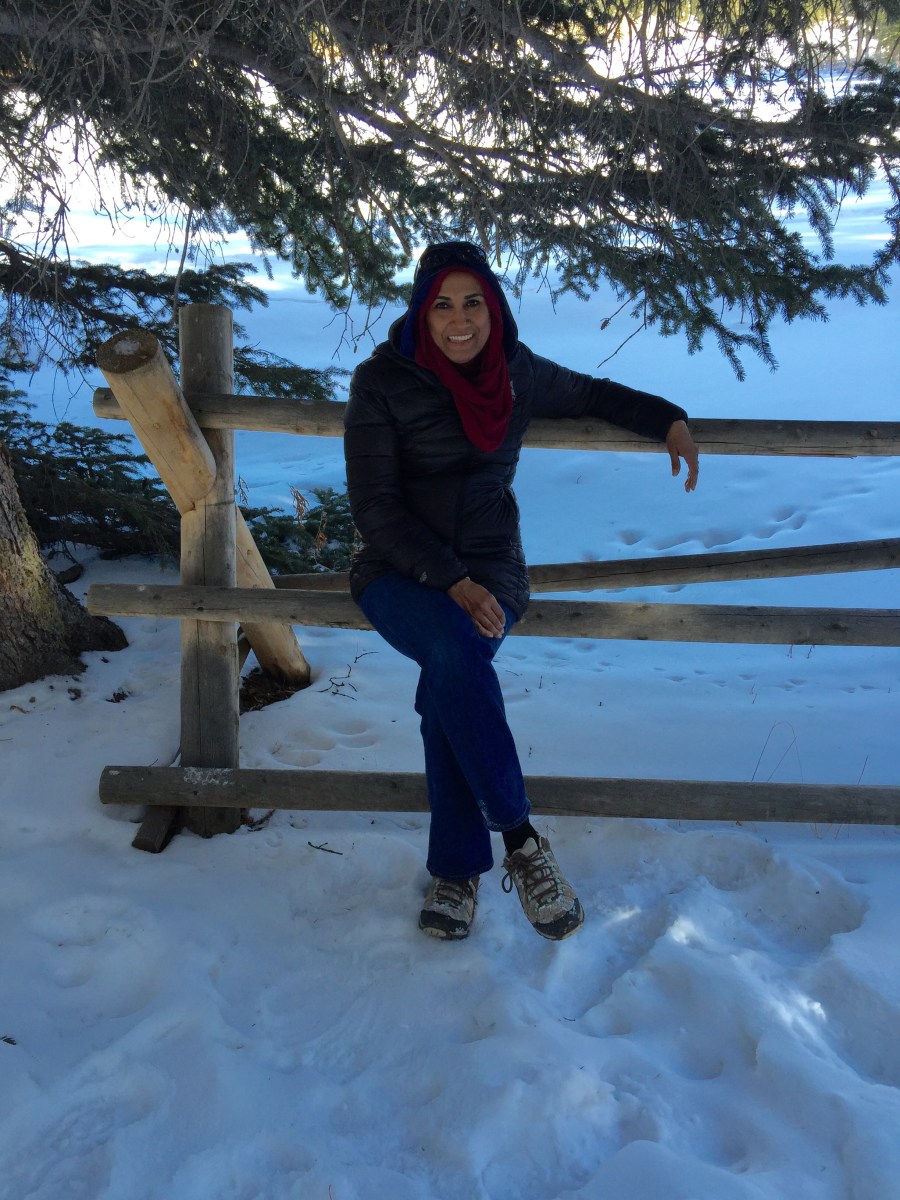 Taking a breather under the pine tree.

Sunday was spent at home getting ready for the week ahead, cleaning out the garage, the kitchen, changing stuff around and watching the divisional championships for football. My Denver Broncos are almost there if they can hold on 3 games and win the SuperBowl!

I started this Beef Nehari right after a late breakfast and stuck it in the oven. It braised all day on low while we went about our day. After the garage was rearranged, the kitchen sorted out and organised, the clutter decluttered….somewhat, and the last game of the night on the telly, we sat down to steaming bowls of beef nehari and hot naan. Comfort food at its simplest and best. 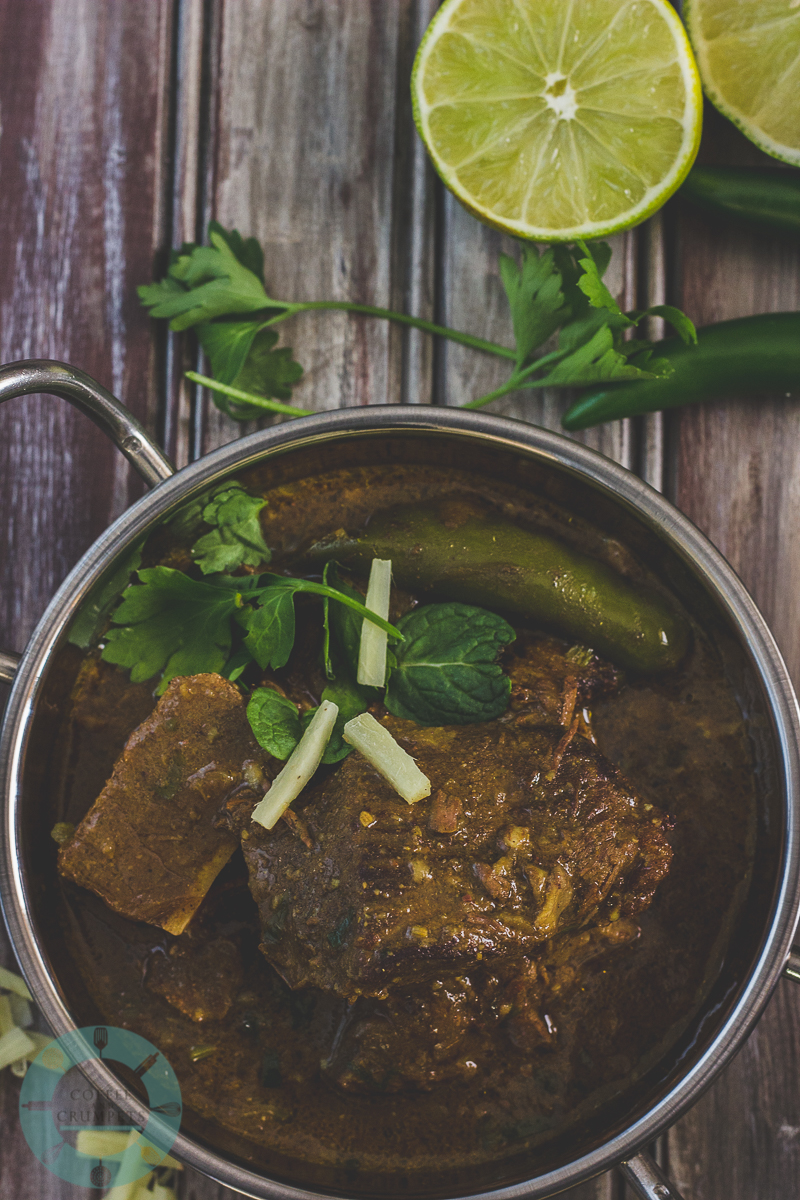 I’m all for balanced meals and all but sometimes, a bowl of meat and bread cannot be messed with. I wish I could say there are some green accompaniments to this but there really aren’t, unless you are counting the cilantro, mint and limes that dress this baby up. Herbs count, right?

Beef Nehari is a famous breakfast/brunch dish in India and Pakistan. The vats of beef or lamb shanks and feet are simmered over night, ready for breakfast the next morning. My father recalled how it was his job, as a youngster, to run down to the local restaurant where nehari had been bubbling all night and bring back the coveted curry for breakfast.

Traditionally, this is made with lamb/mutton shanks and feet. I don’t like either. The smell of feet cooking on the days my father requested this was quite unbearable. I usually spent the day out. A slightly updated nehari uses beef or lamb shanks; gelatinous but with chunks of tender meat, this one I can manage to eat. I like the broth from the feet nehari because it is a delicious bone broth, flavoured with warm spices but I am not a fan of the fatty, gelatinous meat from the feet. 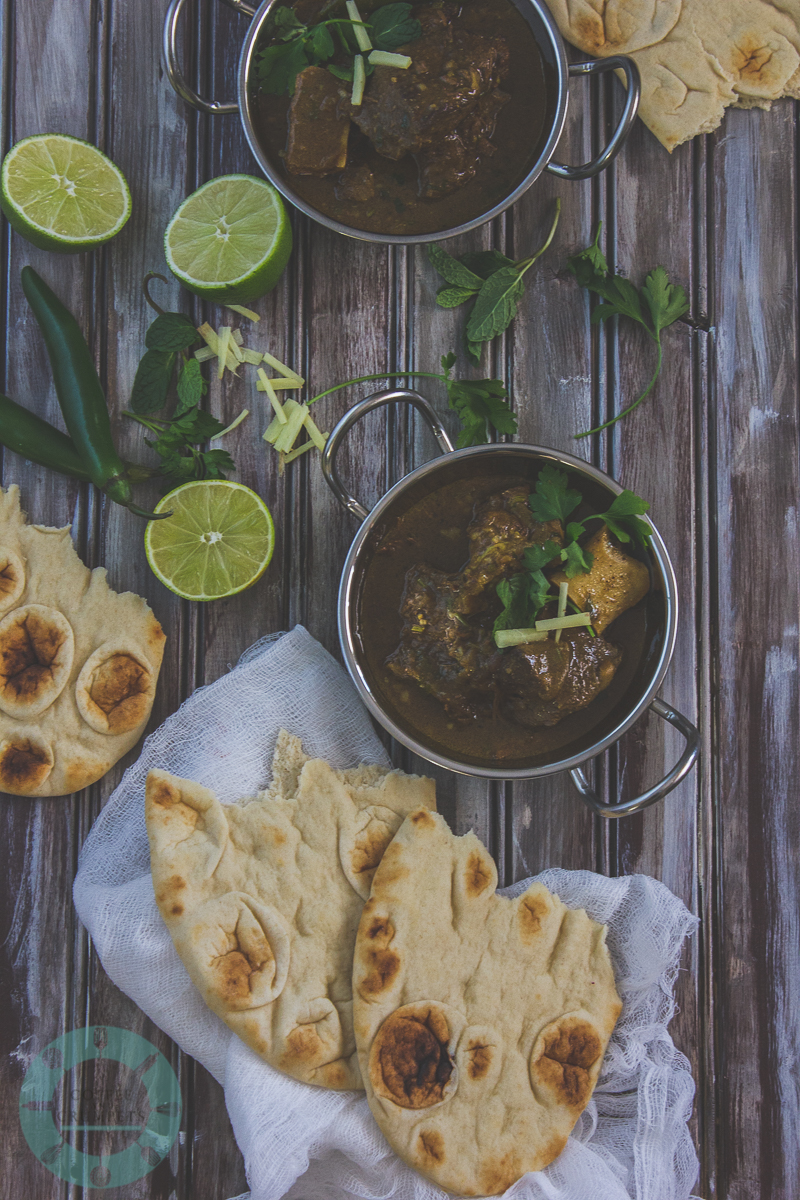 This one is a bit more substantial with the broth being thickened to more of a stew consistency. I also used plain beef with bones instead of shanks because I don’t really the gooey meat from the legs. I know, I know. But this recipe is good for everyone; for those who like gooey meat and for those who have an aversion to gooey meat. This is a flavourful stew with big chunks of tender meat, warm spices and a thick gravy. A squeeze of lime, a sprinkling of fresh ginger, cilantro and mint and it is ready to be mopped up with warm, buttery naan.

This is perfect winter food. The meat cooks slowly in the oven and is low maintenance. Stop by to check the water level every now and then and give it a stir. Addition of fried onions and a thickener like a flour slurry or corn starch, thickens the stew up before serving.

This can be made using a slow cooker and I have made it like that a few times. But I have to justify my Le Creuset purchases so I bypassed the slow cooker this time and broke out the heavy duty dutch oven.

A hearty Indian style stew made with chunks of beef and bone.
Ingredients
Instructions
Wordpress Recipe Plugin by EasyRecipe
3.3.3077 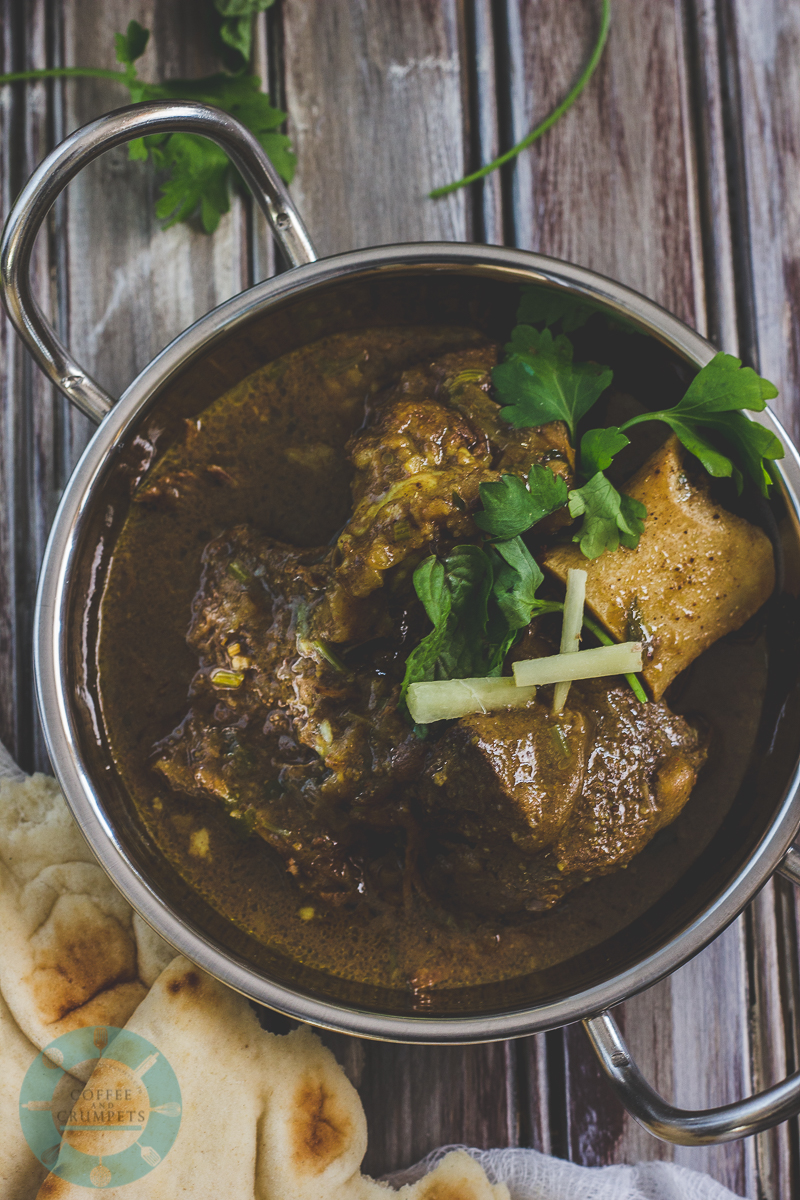 Back to the grind stone now. My time off will be ending soon but I think I have till the end of January before it really kicks in again. Then all the cooking starts again. It has been really nice to just cook for home the past few weeks; no stress, deadlines, menus to arrange. I’ve cooked what I felt like cooking and if I didn’t want to, we ate out.

Our eating out is coming to an end as I have put my husband on a diet and I’m joining him too so he has some support. We’ll see how that progresses! He has a terrible sweet tooth. After dinner last night, he asked for some gluten free cookies we have at home. I told him, no because of the added sugar. After about 15 minutes, while we are watching a show on tv, he yells out “I want just one cookie!” I just about died laughing, he’s hilarious. I made him a nice cup of tea instead.