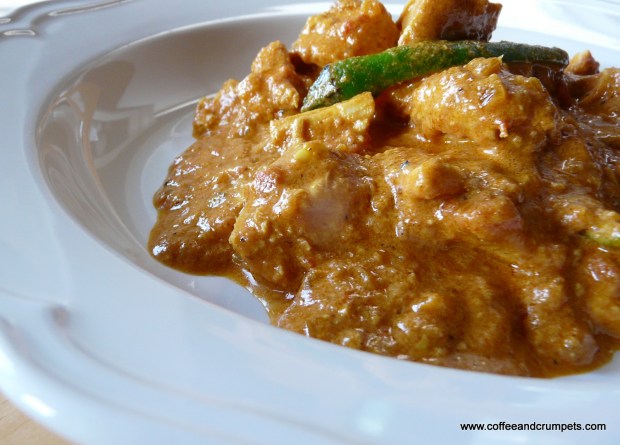 My children’s favourite “restaurant” dish is butter chicken. Of course, we rarely set foot in an Indian restaurant for a number of reasons: 1. the food is less than mediocre 2. it’s EXPENSIVE less than mediocre food. I have eaten the best Indian food, not at any restaurant, but at the homes of  my relatives and friends. I, too, am not a bad hand so why inflict the punishment of bad food on ourselves? The only time we did go to eat at an Indian joint was when it was a big family event and we were invited or when no one wanted to cook. I have yet to try a place here in Colorado.

Al right, so my children’s favourite dish is butter chicken and yet the title of this post is chicken tikka masala? I decided to feature both because in essence they are exactly the same except for a spice or two. Now, I never ate butter chicken or chicken tikka masala growing up. My mother did not make either dish and that comes as no surprise, since chicken tikka masala originated in the UK, not India. We never ate Indian take away in London so we were not familiar with this dish at all. But its popularity steadily increased until it became the number one dish in the UK. It is still very popular in the UK but not the number one any more (apparently chicken jalfrezie has taken top honours.)

Butter chicken was first made in North India. Both these dishes are fairly new additions to the Indian cuisine but have soared to amazing heights. Like I mentioned earlier, both dishes are very similar with the main difference being the addition of fenugreek leaves in the butter chicken. This adds an exotic and bold flavour to the butter chicken, shining through all the buttery, creamy sauce that envelopes the tender pieces of charbroiled chicken. Since the chicken tikka masala came about quite by accident, it is a fairly simple dish. Basically, tandoori chicken thrown into a tomato and onion based masala and finished off with some cream. I add some nuts to my sauce to increase the body of the sauce and add some extra creaminess.

Here is my rendition of the famous British dish, chicken tikka masala. If I don’t have the fenugreek leaves at home when my children request butter chicken then they get chicken tikka masala. They’re happy either way. The chicken used is usually boneless pieces of tandoori chicken that are grilled or broiled. I used a couple of bone in chicken breasts, marinated them for about 5 hours and then broil/baked them. I deboned the chicken and put the meat into the sauce. So, use what you have and if you can grill them over the fire, even better (my propane was out, hence the oven method.)

juice of one lemon

Mix all the marinade ingredients together and add the chicken. You can cut the chicken in cubes and marinade and grill on skewers or just keep whole, make large slits into the flesh and grill whole (cut into chunks before adding into sauce)

Marinate overnight or at least for 5 or 6 hours to get good flavour.

If you are grilling outside, cook until just done but still soft. They will cook again in the sauce.

While the chicken is cooking, make the sauce.

Heat 2 tablespoons of oil in a pan and add the cardamom pods and the onions and fry until light golden and soft.

Add the garlic and ginger, coriander, cumin, garam masala cook for a minute

Add the crushed tomatoes and a touch of water (1/2 cup or so), just to loosen up the tomatoes a little.

Stir everything together and cook covered on medium low heat for about 10-15 minutes.

Check occasionally to make sure the tomatoes are not sticking and if a little water is needed to soften things up add a 1/2 cup.

After 15 minutes, the tomatoes and onions will have softened up and become a homogenous mixture and the oil will be separating.

Add the green chillies and the chicken.

Simmer in the sauce for about 5 minutes or so making sure the chicken is thoroughly cooked.

Add the cream and ground almonds and simmer gently for another 5 minutes. 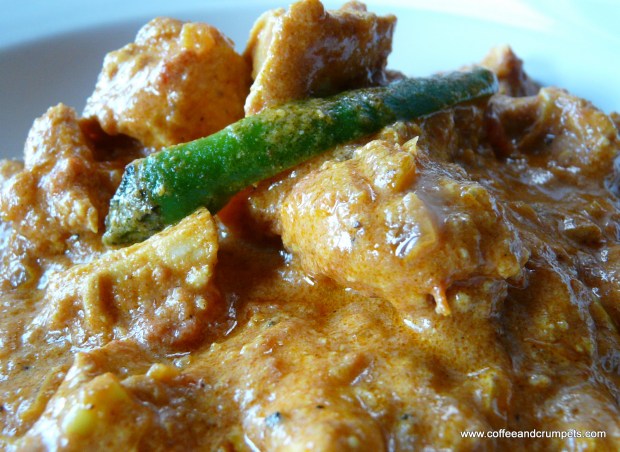 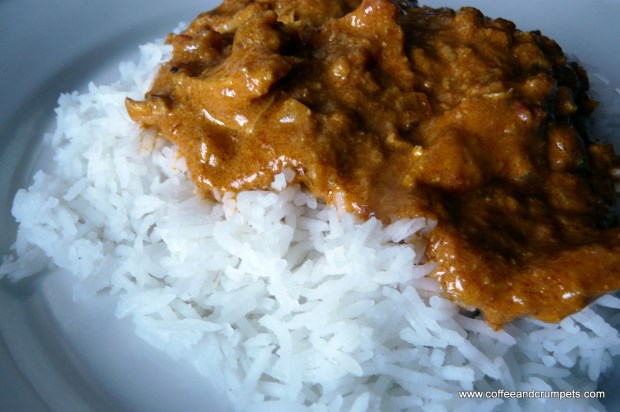 Have a great weekend and thank you for reading!

« Ramadan~A Month of Wondrous Days and Nights
To Lamb Or Not To Lamb? »