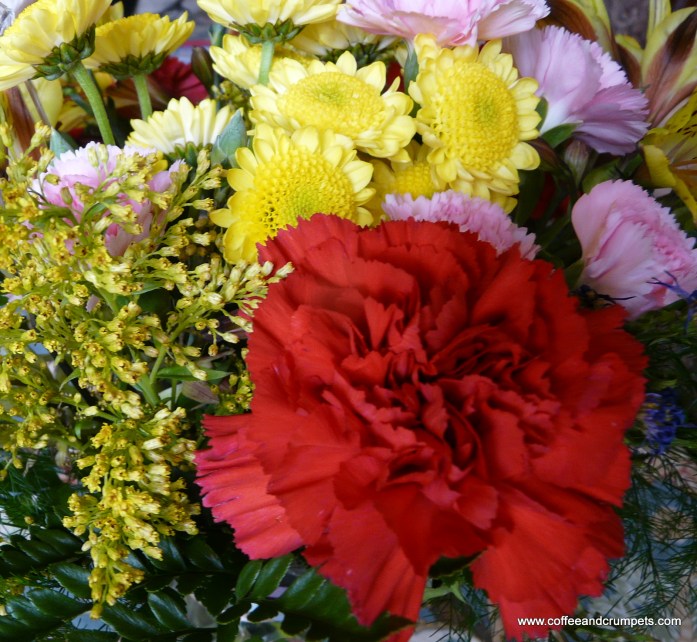 Before I tell you about my first NFL football experience, I have a little update on my “Sad Sate of Affairs” post. On Saturday, I received a beautiful vase of flowers from my wonderful aunt in Michigan! My sad, pathetic post really affected her I think and she decided to lighten my spirits by sending me some flowers. It was really sweet of her and my uncle (and cousin, though I’m quite sure he didn’t have a clue until now, thanks Bilal!) They made my day and they cheer me up everytime I pass by my hall table. I have to smile because the thought behind them is so sweet. Thank you sooo much Afroze Mami, you don’t know how much I appreciate your thoughtfulness and kindness. 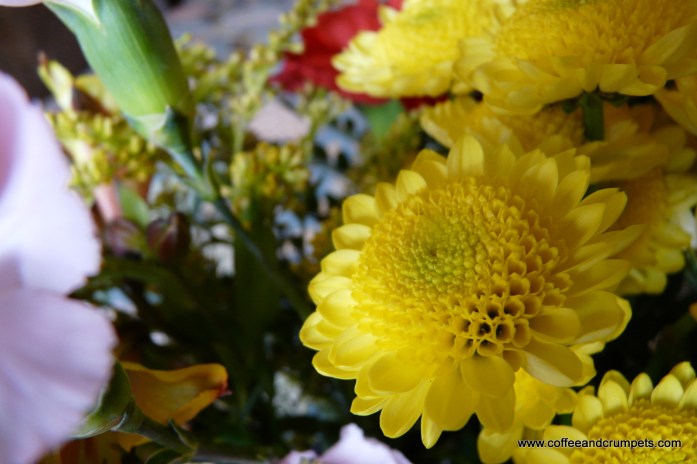 Saturday happened to end up a wonderful day because as you now know, I received a beautiful vase full of flowers, my husband made dinner so I could relax my knees and I was given two tickets to a Broncos game for Sunday, and boy, did I have a blast!

After researching the various parking options, hubby and I decided the best course of action would be to just take the Broncos Ride. This ride is a public transport bus that picked us up at our local park and ride and dropped us off at Invesco Field, all for a nominal fee. That was so convenient; we didn’t have to park out in the boonies and walk a million miles to get to the stadium and we didn’t have to pay the exorbitant parking fees. We parked our car in the free RTD covered garage and walked a few steps to the bus stop. There we hopped our air conditioned bus along with other blue-orange supporters and went on our merry way.

The sight at the field was amazing, it was just a big sea of blue and orange. Denver is very much a sports city and very proud of all its teams. We have been Bronco fans for a long time now so this was a great treat for us. Especially for me since I’ve always wanted to attend a football game but my hubby always told me it’s better to just watch from home. After yesterday, I told him that he was talking nonsense! It’s great to be at a game! 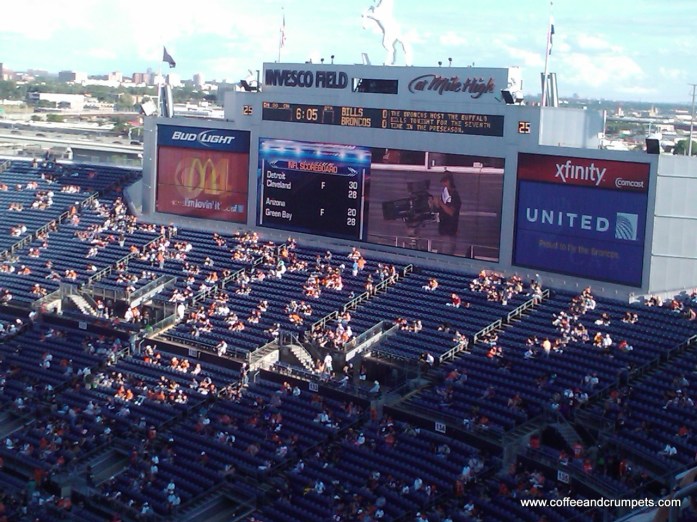 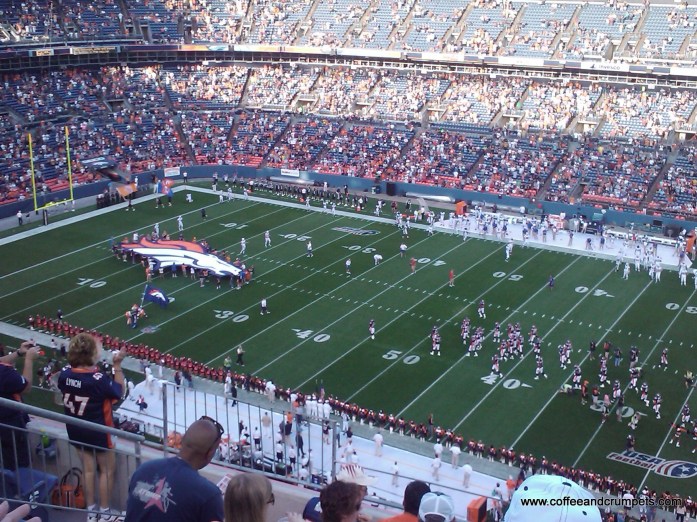 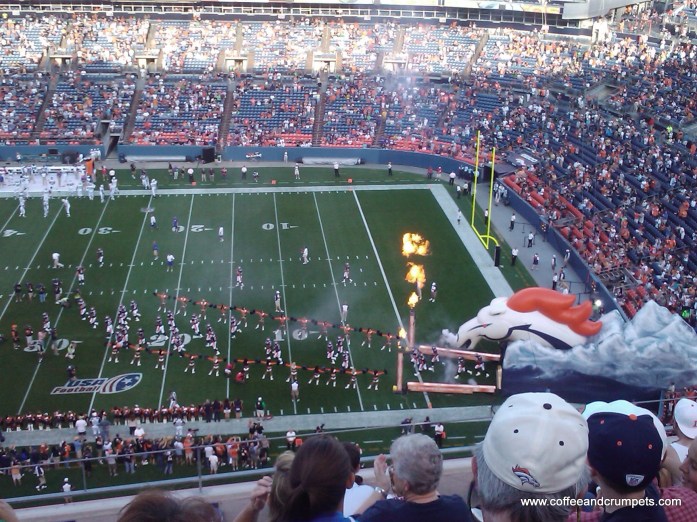 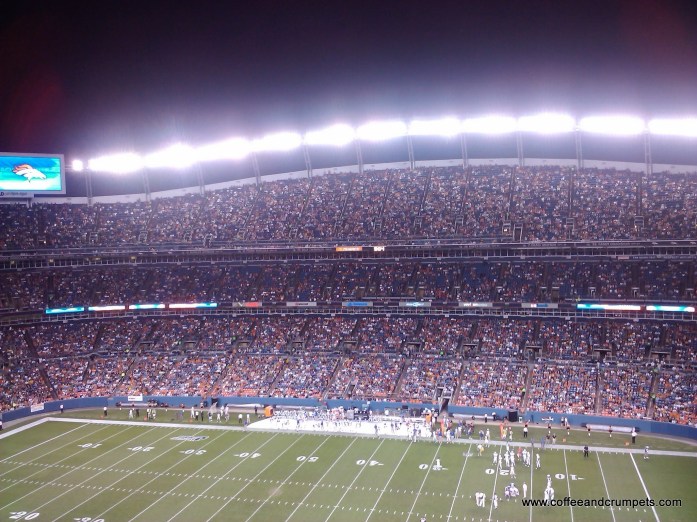 As much sport as I played in school, I was in almost all my school teams, I rarely watched a game at a venue. My dad never really went to football matches (English football), preferring the comfort of his sofa over the uncomfortable stadium seats, if you can even call them that. He was a member of the Middlesex County Cricket Club at Lord’s Cricket Grounds, which was down the road from where we lived but I don’t remember him going to see cricket matches either. I did go to see an England versus Pakistan cricket match once.

When I moved to the US, I had absolutely no interest in NFL football or baseball. My interest in football only started after my hubby and I were married. He’s a big fan and he played in high school till he tore up his knee. The only time other time we went to any game was when we went to see a Rockies baseball game back when we lived here before. Since then, I’ve always had little children to tend to so I opted to stay at home when others were going to Astros games or Rockets games. It’s a different story now that the children are grown. I think Laith would enjoy going to and we may start doing that now.

To top of the great experience, the Broncos won! Of course, they were playing Buffalo Bills which are like, the worst team ever. Our only negative experience ended up being sitting in front of a couple of total jack asses who would not shut up the entire game. I was seriously ready to do him in! Other than that it was perfect, we had no one sitting in front or beside us and we had good seats.

The food was a bit disappointing considering it’s a sports field but we managed. Next time, I think we’ll bring our food with us. The pictures from the game were taken with my cell phone so the resolution is not all that great  but they’re alright.

I really appreciate my neighbours, Mary and Dick, for thinking of us! I had such a fun time and it was a great date night.

Hope you all had a great weekend and are ready for another week to start. I can’t believe the first week of school just flew by! I hope to type up some recipes this week for you and post them.

Thank you for reading and have an awesome week!

« A Rant, A Rave And A Game
Strawberry Rhubarb Pie »