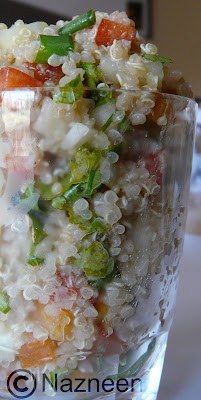 When the weather turns cold, the last thing my body craves is a cold salad. It shudders at the thought of fresh, cold vegetables going inside. It wants nice, warm, gooey comforting, foods slithering down the gullet. So,needless to say, I don’t make or eat many salads during winter. That poses a bit of a problem because I find myself not eating enough vegetables during the cold months, well, not enough leafy greens, at least. Usually, those warm, gooey comforting foods aren’t composed of vegetables! Thank goodness for my body, the weather has been really beautiful lately. It’s the typical, unpredictable March, sunny skies one day and a snow storm the next. But those sunny days have been absolutely beautiful and it was one of these sunny days this week that the thought of a salad entered my mind… and my body didn’t shudder at it’s mention. It was still a bit cool so I thought maybe a salad that included a whole grain or pasta, along with the vegetables in an Asian flavoured dressing? Asian flavours have a nice “warm” taste to them and thought it would be perfect. I was wanting to make quinoa because it had been a while since we last had it and decided to use my Asian dressing for a quinoa salad.


Alright, here’s my educational or informational bit. Most people have at least heard of quinoa. But it’s still relatively unknown and most people I know don’t use it. It’s wonderful. It’s a little like couscous but it’s not a wheat or a grain. It feels like little seeds popping in your mouth. Actually, quinoa is a seed. It was first grown 4000 years ago in the Andean region of South America. The Incas called it the “mother of all grains” and held the crop sacred. The unique thing about quinoa, and why it is so healthy for us, is because it contains a balanced set of essential amino acids, making quinoa “a complete protein source among plants.” Read more about quinoa here.


Quinoa is cooked just like rice. In fact, you can cook it in a rice cooker. It can be used in place of rice or couscous in many dishes. It can be eaten at breakfast cooked just like oatmeal. One important thing to do before cooking is to thoroughly rinse the quinoa, and I mean thoroughly. I didn’t care much for quinoa until I realised that I was not washing it well enough. The seeds are covered with a bitter residue called saponin and if not washed off, this will just make the whole dish taste bitter and weirdly grassy. So, WASH THOROUGHLY many times and even let it soak for a couple of minutes.


There is a peanut sesame noodle salad I like to make with peppers, shredded carrots and cucumbers. It’s cool and refreshing with a wonderful, creamy, peanut dressing. I used the same inspiration for my Asian quinoa salad. I did not use any shredded carrot, but that day I had a fennel bulb that needed to be used up, so in it went. The quantities I have listed for the dressing make about one cup. You will probably end up using all of it. I used three quarters of it because I wanted a little for the Asian roast chicken I was making. However, the quinoa salad had absorbed all the dressing by the time we had dinner so, it was nice and moist and flavourful, but not really creamy. I suggest maybe keeping out a quarter cup and mixing it in just before serving. Most importantly, my kids are beginning to love quinoa and that’s great news for me.


Quinoa Salad
1 cup/170g quinoa, washed in several changes of water*
1 cup/236ml red bell pepper, small dice
1 cup/236ml yellow bell pepper, small dice
1 cup/236ml English cucumber, small dice
1 cup/236ml carrots, shredded, about 2 large
1/4 cup/59ml green onion/scallions chopped fine, about 3
1/2 cup/118ml cilantro, chopped
1 cup/236ml Peanut dressing, recipe follows
salt and pepper to taste
Put the washed quinoa and 2 cups of water in a medium pan and bring to boil.
Add a teaspoon of salt.
Once the water comes to a boil, turn the heat to low and cook the quinoa for 20 minutes.
After 20 minutes, turn off the heat and leave pot covered for 10 minutes. Then
fluff up the quinoa with a fork and set aside to cool slightly.
Put the quinoa in a big bowl and add all the chopped vegetables.
Pour the dressing, a little at a time and mix gently but thoroughly.
Taste for salt and pepper.
Add the chopped cilantro and fold in gently.
If eating right away, use all the dressing.
If refrigerating the salad to eat later, reserve a 1/4 cup of the dressing to mix in right before serving.


*NOTE: 1 cup of quinoa makes about 4 cups (713g) of cooked quinoa. I used about 3 cups (555g) to make this salad and kept the 1 cup for another use. You can use 3 cups or use all of it. Since it’s a cold salad, you can easily refrigerate the left overs. 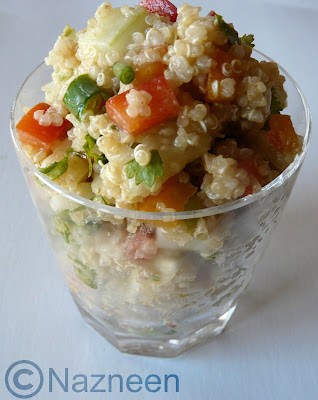 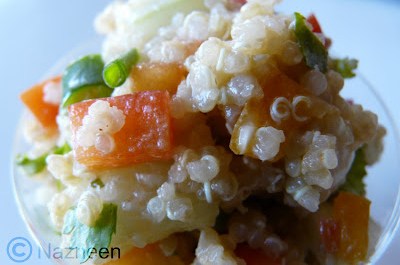 Hope you guys enjoy it! I served this with a roast chicken marinated with Chinese Five Spice powder and some of the peanut dressing and sweet, buttered, organic white corn. Alhamdulillah, it was a good dinner.